The recovery is on for Central North Carolina's Deer Herd..... Threeletters EHD.

My apologies for the ridiculously long break in posts.  So much to discuss. Lets start with one near and dear…. The 2014 travesty that was the North Carolina Deer season.  Epizootio Hemorrhagic Disease (EHD).  This is a viral disease, spread by gnats, which causes internal bleeding and is extremely devastating in areas where the deer density is high.  My hunting time was also limited last year so I sat in areas that were known to be high deer traffic areas.  In years past these were gimmees for does.  My goal was meat harvest.  I used 5 vacation days to hunt sun up- down and weekends.  Not only did I not harvest a deer I saw whopping 4 deer, period.  That includes a buck swimming across a lake, a lone doe running along side the road and road kill! Generally, I would see that many per day in front of my neighborhood.  The first sign of bad things to come was the fam across from my office.  Typically we would see herds of 10+ at various times grazing in the corn stalks.  Sometimes as many as 40 deer could be counted.  Last year ZERO.  Not one.  At first I thought it were development pushing deer to new areas, perhaps me… bad wind, timing, perhaps too warm for good movement.  Then gun season began…. A slight up tick but still guys hunting over bait, running dogs  were also coiming up empty  that is when I knew… this would not be good.

How bad was it? Lets look at number sform some of the numbers comparing the 2013 harvest to the released 2014 harvest.  For camparison we will look at the North-Central counties which have traditionally had some really strong harvests. More importantly, these areas are heavily hunted with hounds, bait and rifles.  I metion this only to say the “great mast” theory does not hold water in this region.  So lets take a look:

ore like this one harvested by my frat brother from a stand near Rougmount, NC. 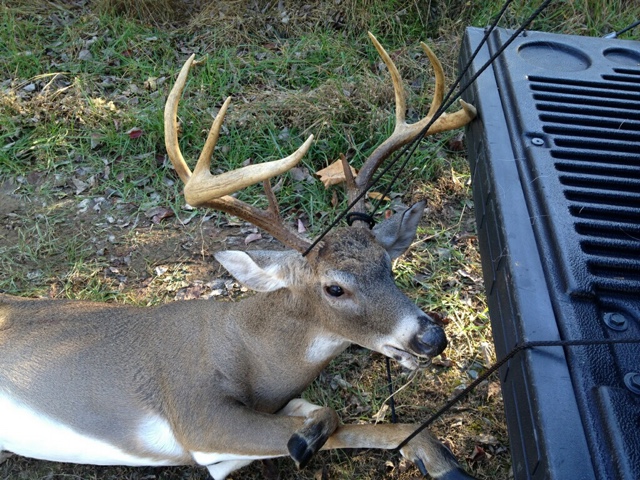